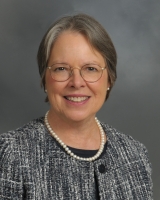 Annette received her Bachelors and Masters of Nursing from East Carolina University, and a PhD in Nursing from the University of Texas at Austin before performing two post-doctoral research fellowships at the University of Texas Southwestern and at Weill Cornell School of Medicine. Annette then launched her academic career, joining the faculty of the New York University Medical Center, becoming Director of Nursing Research and Assistant Professor in the Department of Dermatology, before moving to the National Institutes of Health to serve as Scientific Director of the National Institute of Nursing Research, and Chief of the Wound Healing Laboratory, the focus of her impressive research career.

Following her tenure at the NIH, Annette became Professor of Nursing and Surgery at the University of Mississippi Medical Center, before moving to UMass Amherst. Over her career, Annette has served as Principal Investigator on a myriad of grants, including many from the NIH and NSF, including a P20 Center Grant to develop the science of symptom self-management, a R01 to study the wound environment in patients with spinal cord injury, and a R29 to study the basic biology of chronic wounds focused on the proteolytic degradation of extracellular matrix, amongst many others. And based on her research grants, Annette has penned over 50 scholarly publications, serving as first or senior author on a majority.

Annette is also an impressive academic citizen, serving in many advisory and leadership roles, including serving as president of the Wound Healing Foundation, has delivered many distinguished lectures nationally and internationally, and has been elected to prestigious societies and received important awards, such as election as a Fellow of the American Academy of Nursing, one of the 100 “Incredible East Carolina University (ECU) Women,” and subsequently, the 2018 Distinguished Alumnus Award from ECU, was a Harvard Macy Scholar and received the Distinguished Service Award from the Wound Healing Society.